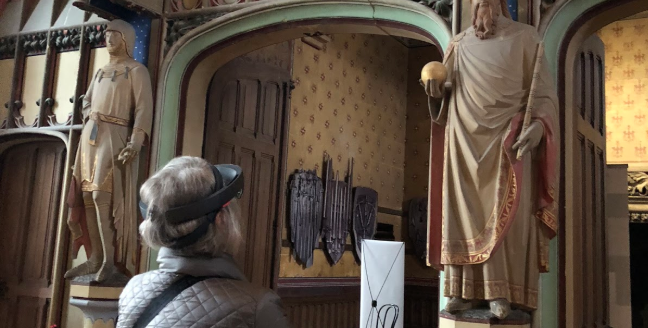 Every year since 2012, the French Ministry for Culture have launched a call for projects called “Innovative Digital Services”. It represents a plan for funding solutions which facilitate access to culture, heritage, creation and cultural democratization.

Minsar had the honor of being chosen for the 2016 edition, by building a partnership with three prestigious French institutions: the Centre for National Monuments (CMN), the Museum of Decorative Arts of Paris (MAD), and the National Museum of Archeology (MAN).

That is how for three years, we have been collaborating towards the future of digital engagement with Cultural Heritage. In this article, we will present two particular experiences that were made by the CMN, and the MAN.

Restituting the past: Château de Pierrefonds

Context of the project

The Château de Pierrefonds was our first experimental project with the CMN. On November the 18th and 19th 2017, among other activities related to medieval culture, the institution proposed a mixed reality experience made with Minsar in the Salle des Preuses. The room was previously used to hold Napoleon the 3rd’s collection of ancient arms and armors. Unfortunately the collection was moved out of the castle in 1880, and is now kept in the Invalides. As a result, the Centre for National Monuments proposed a digital restitution of the collection, which was made possible by using mixed reality. The main goal was to restore the impact of the collection on the visitors entering the room by providing them with tools to better understand the space and its role under Napoleon the 3rd’s rule.

The experience was made by Caroline Calpena, who was working as head of the public and mediation department at the time. With Lina Nazakawa, head of multimedia projects at the CMN, they started establishing different points of interest throughout the room. In 2017, Minsar was only a prototype, thus the creation and visualization of the experience was only possible through Microsoft Hololens. Moreover, at this time the CMN had not yet gotten the authorization to scan the real armors in the Invalides. That is why they decided to put large, cutout photographs of the armors on the wall. With the photographs being in very high resolution, the effect remained quite convincing.

Reception by the public

On November the 18th and 19th, the experience was seen by museum visitors through Microsoft Hololens. We formed a team of five people from Minsar and CMN. Each one of us was responsible for one visitor, from putting the headset on their head, to the end of the experience, in order to have a true exchange with them. In addition, the CMN asked HNC students from a nearby high school (Jean Monnet in Crepy en Valois) to collect the visitors’ impressions through a questionnaire designed for this purpose at the end of the experimentation. The results of this questionnaire were extremely encouraging. Indeed, 95% of the people answered that they enjoyed the experience, 97% said they would recommend it if they had the chance, and 79% of them thought the experience helped them better understand the history of the castle. Additionally, the study showed that the experience had an impact on people of all different ages. Finally, the visitors’ feedback allowed the CMN, as well as Minsar, to prioritize some specific problems that had to be addressed quickly, such as the need for interaction. Experimenting directly with the public was a fantastic way for us to be confronted with their concrete expectations in terms of usage and reception of cultural heritage through digital means.

Beyond the display case: Minsarcheo

Context of the project

The second public experimentation was facilitated by the National Museum of Archeology (MAN), for the National Days of Archeology in June 2019. This experimentation was particularly important to Minsar, because it was the first time that the entire process was done by the cultural institution, from creation to distribution. In addition, this was the first time the visitors could see the experience on their own devices.

The experience was called Minsarcheo, and was created by internal members of the museum : Emily Chambers and Oceane Duboust, who were in charge of digital mediation in the museum at that time, Marjorie Fremeaux, 3D infographist, Christine Lorre, head curator of the collection of compared archeology, and Thomas Sagory, head of digital development in the museum, who also directed the whole project. They decided to set it up in the Room of Compared Archeology, and wanted it to be playful, original and very easy to make. They chose a certain number of objects that were displayed in the room, and which were scanned by the Réunion des Musées Nationaux. The scans were available on the Sketchfab platform, and the idea was to import these scans into Minsar and then randomly dispatch them throughout the room. The visitors would be invited to approach these digital copies, turn around and observe them in detail, then amuse themselves trying to find the original objects in the display cases. Along with these objects, the museum team dispatched audio commentaries throughout the room which explained its role, the methodology of compared archeology, and the experience itself. A flyer and poster were created, displaying the QR code for the visitors to access the experience directly from their own devices.

Reception by the public

On the day of the public presentation, the visitors were welcomed at the entrance to the room. It was explained to them that there was an experience there that they could see through their own devices. If they were not equipped with a compatible device, the museum would lend them one for the time of the experience. They would then wander through the room, enjoying the experience. The visitors as well as the museum staff were very pleased. The visitors said that the experience allowed for a playful and original visit, up close to the objects. As for the museum staff, they appreciated the fact that they had entire control over the experience, from its conception to its distribution to the visitors. Moreover, they were enthusiastic about the idea that Minsarcheo allowed them to better emphasize seldom-seen objects in the display cases. In this perspective, Minsarcheo was prolongated through the end of 2019 with a more permanent installation, and with the conducting of a public survey led by researcher Jan Smolinski (PhD in Sociology). This investigation was made in the framework of young researchers residencies hosted by the French Ministry of Culture. The goal was to propose a reflexion upon the conditions of organization of the reception and visit areas. On the digital point of view, it was question of evaluating the capacity of a digital device to create a permeability between materiality, spatiality and temporality, and to influence the understanding of the site and its collections by the visitors.

Minsarcheo was, again, a real milestone in the history of Minsar. As explained earlier, it was the first time that the entire process of creation and distribution of an experience with Minsar was made autonomously by a museum. Moreover, it was also the first time that the experience could be seen and enjoyed autonomously by visitors. Beyond that, Minsarcheo was also a very rich experience in terms of research, because it opened true reflection axes: renewing our perception of cultural heritage, the idea of playing at the museum, and lastly the notions of contextualization and decontextualization. A paper issued from a recent presentation of the project in a symposium will soon be published, and will provide more insight into these questions.

These two experiments, and the Call for Projects more generally, showed how and why Minsar was indeed a very interesting solution for promoting and presenting cultural heritage. In a world where augmented and virtual reality technologies are showing more and more potential in a great variety of sectors (you will find on our website another article presenting the main advantages of these technologies for heritage), Minsar truly gives cultural institutions the means to adopt these technologies for their purposes. Cultural associations can now better respond to the visitors’ increasing demand for more engaging and immersive experiences, to which augmented and virtual reality are particularly well adapted.

SUBSCRIBE TO OUR NEWSLETTER
Thank you! Your submission has been received!
Oops! Something went wrong while submitting the form.
MADE IN PARIS, FRANCE WITH 💜